The Scissors - 'hats on' at the Band Competition Grand Final!

BBC Cambridgeshire got a bit confused by our headgear with this review (it was actually guitarist Toby wearing the tricorn hat...) 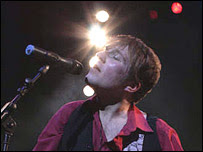 The Scissors
The penultimate band of the bill and it's the turn of 'The Scissors' to take to the stage. The only band to consciously change the aesthetics of their instruments, the band have a certain theatricality about them, not least because the members appear to take on the role of numerous protagonists with every performance.

(The Scissors, portrait photo by Elii Bright)
This time saw the turn of the bassist to change persona, performing under the guise of a pirate, with the aid of a hat that refused to leave his head throughout the performance; a remarkable feat considering the enthusiasm of his response to the adoring applause of the audience. The Scissors own a defined look on a stage this size, and own a certain naivety that remains appealing to a vast majority of the spectators, and ultimately saw the band sail through a mid tempo set without any notable threats.
(Group photo by Liz Mitchell) 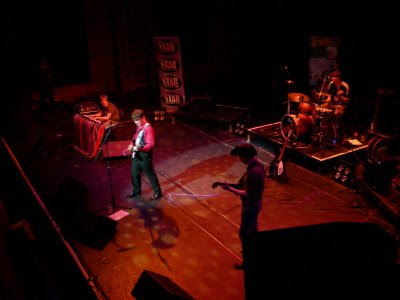 Read the full review here:
http://www.bbc.co.uk/cambridgeshire/content/articles/2009/05/19/cambridge_band_comp_09_final_review_feature.shtml
Posted by StewartScissor at 6:57 am