We're thrilled to be playing at The Eagle in Salford this Friday (30 September) as part of Salford Music Festival! Now in its seventh year, this grass roots, no-nonsense event, is part of the musical life blood of the city. Bob of Aural Delights has more info on his blog... 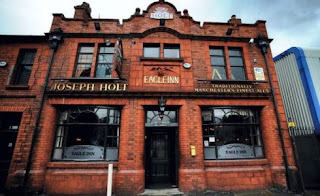 We're on a great bill alongside The Junta, Cambridge's Bouquet of Dead Crows, and Kit B. And it's free entry!

We'll also be promoting the forthcoming 'Malawi' famine-busting charity compilation out on 1 October on German Shepherd Records, which features (among other delights) a brand new track from ourselves, 'Glossy Magazines'. It's a song you might be familiar with if you've been to any of our gigs this year, and we're very proud to have it included on this worthwhile album.
Posted by StewartScissor at 6:14 pm No comments: