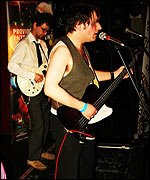 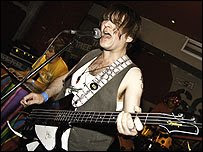 The Scissors (Winners of Heat 2)
Aesthetically, there was always going to be one band that stood out from the sizeable crowd, and they perform under the guise of ‘The Scissors’.

Comparable to ‘Panic at the Disco!’ due to their apparent involvement in the revival of Parisian theatricality, but resounding within the boundaries of a far more credible genre, ‘The Scissors’ were as endearing as they come. They had the strongest songs of the heat, when originality, crowd response and the tightness with which they played were considered, and when accompanied by the atmosphere created by the band, made for an irresistible live show, that when performed on a bigger stage, would feel at home within the boundaries of a stage production.
The Scissors were the most popular band to play thus far in the heat, eventually winning the beer cheer and overall on points. Full review here
Posted by StewartScissor at 4:08 pm