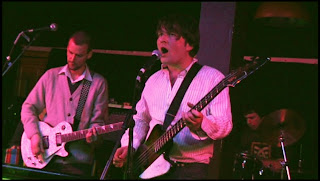 Scissors in action at Cambridge Barfly...
Tim (www.nowitson.co.uk) reviewed us, "first up the local band, The Scissors. In front of a reasonable crowd they seemed a little overawed by the opportunity to play their brand of alternative pop, their sound augmented by an organ to good effect. They play a handful of self-penned songs and as their confidence on stage grows, they show enough promise to keep an eye open for them on the Cambridge circuit."
...which was nice. Overawed? Maybe a little, it was a hungry old beast of a crowd! We enjoyed it though!
Posted by StewartScissor at 12:23 pm

Email ThisBlogThis!Share to TwitterShare to FacebookShare to Pinterest
Labels: Review