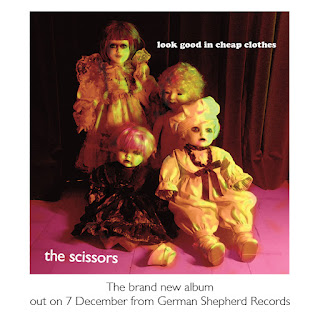 Nearly there! Our new album 'Look good in cheap clothes' is out on 7 December on German Shepherd Records; with a launch party on 6 December at the Cornerhouse, Cambridge (FREE ENTRY)! CDs will be available on the night!

Says Bob at German Shepherd...
"Cambridge’s highly regarded band The Scissors return with a brand new album replete with their signature swirling keyboard-fuelled psych-pop, horrorshow freakbeat guitars and new wave post-punk basslines. Titled “Look Good In Cheap Clothes” the 7th December release shows a real development from its popular predecessor “Haunted Mirror”. With a dazzling mix of garage punk, otherworldly pop, and some new explorations the band demonstrate a significant shift in their sound whilst retaining the core of their alternative take on music."
Posted by StewartScissor at 1:21 pm