This week we meet The Scissors, who love rock 'n' roll outsiders, hope their best song is yet to be written and would like to be covered by The Fall.


1: How long have you been together as a band?
We've been going in various forms for 10 years, come this December! But the current line-up's been together since 2010.

2: Talk me through the band members: what do they do and what are they like?
Stewart (second right) sings and plays bass. Loves cats and cookery, though not at the same time.
Toby (second left) plays guitar. Loves ephemera, pop art and ancient megaliths.
Simon (far left) plays organ and homemade electronic contraptions. Likes making mechanical greetings cards.
Huw (far right) plays drums. Likes walking and cycling, loves Emily.

3: What's your favourite thing about Cambridge?
The way the river meets the trees meet the pubs.

4: What's your best song?
We've not written it yet, hopefully! But Phone Calls from the Dead (a cautionary tale about not believing everything you hear, driven by a severely off-kilter guitar riff) always seems to go down well, as does Your House has Ghosts (garage-psych stomper about being trapped by one's own memories).

7: Which bands or artists would you pick to play your perfect festival?
The perfect festival is one where none of the good bands clash at the same times, so you get to see them all. Huw would have The Mars Volta, circa 2003-2005. Simon loves the Bonzo Dog Doo-Dah Band, but The Demon Barbers are probably his favourite festival band. Stewart loves Dreadzone at festivals – they're perfectly suited to that environment and never fail to unite a crowd in a nonstop dancing frenzy. Toby would love the original line-up of Thirteenth Floor Elevators, but that's not likely to happen on these shores any time soon.

8: If you had to cover one song, what would it be; if you could pick any band or artist to cover one of your songs, what would it be?
We'd cover Garden of my Mind by The Mickey Finn, a classic UK psych-rock track from 1967. It'd be nice if The Fall covered one of ours. We once covered The Stooges' I Wanna be Your Dog in the style of The Fall, with Stewart shouting out random breeds of dog in the manner of Mark E Smith…

Stewart – Terry Scott
Simon - Bernard Bresslaw
Toby – Sid James
10: Can you suggest another local band or artist that we should feature on this page?
Think most of our favourites have been featured! (The Seven Twenty, Bouquet of Dead Crows, Beverley Kills), but maybe you've not featured Moonstrips, a fantastic Cambridge garage-psych trio who have just released a cracking three-track EP (facebook.com/moonstrips)?

We're looking ahead to summer. Nice(ish) weather and outdoor rock'n'roll. Knotted hankies in the style of Steve Jones optional. We've added a few dates to our gig calendar! 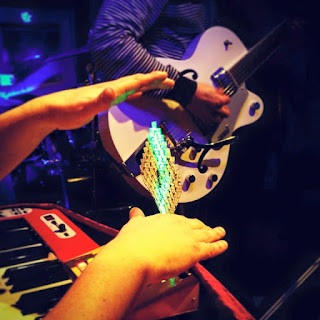 Posted by StewartScissor at 9:59 am No comments: