What to expect from the new Scissors album?

Here's a lovely piece on our forthcoming album from Bob's Aural Delights!


'The eleven track set grabs the attention from the get go with a thumping bass and drum combination, surging Hammond and searing guitars and excellent call and response vocals. “Come With Me” is a great opener, followed by the exceedingly catchy “No go the lowdown” which echoes classic british pop-rock with a tinge of urban blues and a smattering of soul in the vocals, and a killer hook.  This band is all about textures and layers and the visceral guitar tones of “Don’t Hate Just Because I’m Yours” introduce another memorable melody, which promises to be a real crowd pleaser with it’s more-ish chorus. The band keep the songs short and to the point, perfect little nuggets of modern music. After the up tempo start matters slow down for the more restrained “All These Things” which is notable for Simon Powell’s sonic explorations and busy drums from Wallace.  The punky motorik “I’m Not The Real Me” perhaps sums up the unique qualities of the band, conjuring a maelstrom of different sounds into a melange of psychedelic pop. The album title track is a tight little tune with a ska feel, great organ sounds, and tasty pop elements and a tidy guitar solo. “Phones Calls from the Dead” has another killer guitar hook, pumping bass and great changes echoing Zappa at his most playful.  Gritty picked guitar opens the blues drenched “Why Don’t You Cry” which comes across like the mutant offspring of “House of the Rising Sun”, nice soloing from Lefever, combined with some great feedback control make this the stand out track for the guitarist. “Sjhake” – I should have asked them what the added “J” was for, but I forgot, is a tasty portion of blue-eyed soul-rock.”Come With Me” reprises in a jam-like free improv way before morphing back into the main song. The album closes with ambient sounds and the measured “Attack Of The Phantom Teardrops” which takes a deep emotional breath after a such a busy and impressive selection.
A highly recommended second album release from a great band.'
Posted by StewartScissor at 3:45 pm No comments:

You can catch our unplugged (and unwashed) appearance on Monday's Stagger Indie Cambridge 105 show on Mixcloud! 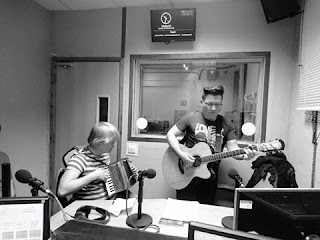 We played two songs live and acoustic in the studio, 'Haunted Mirror' (about 30 minutes in) and 'Attack of the Phantom Teardrops' (about 40 minutes in), plus some tracks from the album and other things we brought along...
Posted by StewartScissor at 10:02 am No comments: 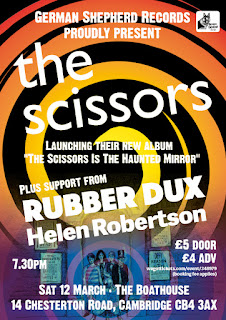 We're thrilled to have Cambridge's Rubber Dux play with us at our album launch gig on 12 March - but sadly it'll also be their farewell performance as they go their separate ways to do Other Things...
Let's make it a cracking sendoff for them - and here's a reminder of what they sound like:

Posted by StewartScissor at 2:44 pm No comments:

The Scissors' new album will be released on 11 March, and to spread the word we'll be appearing on the radio on a few shows to play tracks from it and talk about how we (eventually) made it!

First up, we're on Stagger Indie on Cambridge 105 next Monday (22 February). Tune in at 10pm for fun and frolics! 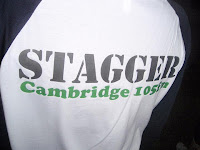 Posted by StewartScissor at 8:38 am No comments: